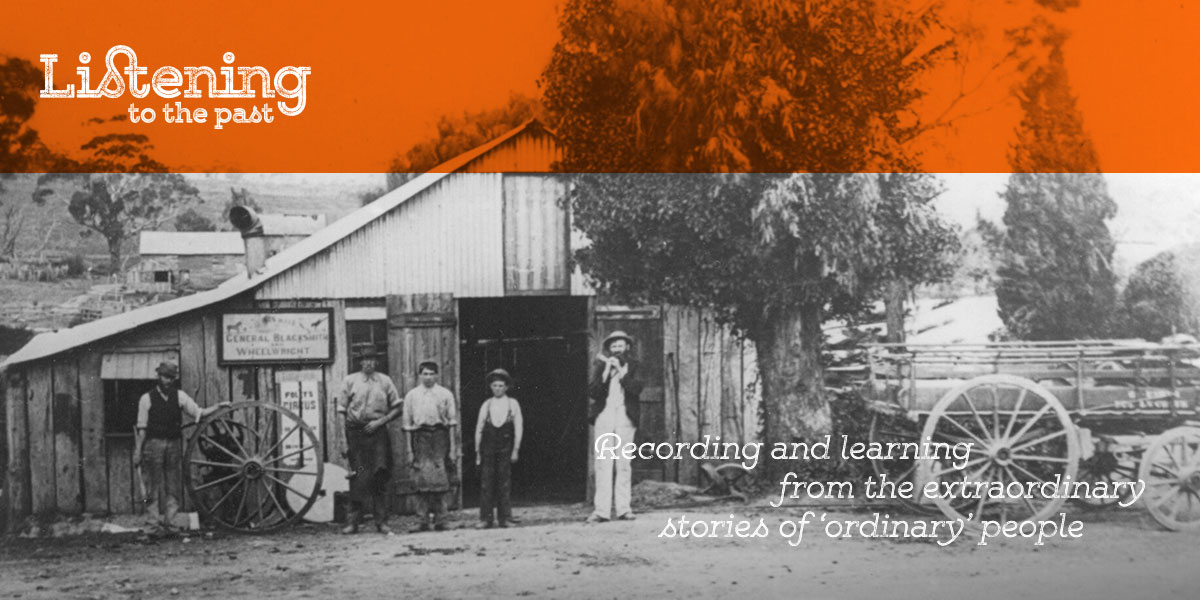 Continuing the theme of my previous post with memories of summer, I’ve selected this time some excerpts from oral history interviews focussing on milk in summer – keeping it cool (or not) and drinking it.

Delivering milk to the dairy factory in Meadows, 1935.

Pat Connor was a dairy farmer in Prospect Hill in the Adelaide Hills from the 1920s until the 1960s.  When he first started milking cows, it was by hand.  His mother bought the family’s first milking machine in 1938.  At that time, milk was stored in 10-gallon cans and collected by milk trucks that took it to the local dairy factory in Meadows.  I asked Pat how they stored and cooled the milk that they collected in the evening:

Well, there was various ways of cooling it. In the very hot days, I recall mum having wet bags and sort of putting them around the milk cans, which I suppose kept it a little bit cool. But when the milking machines came in it was much better because you had milk cooling system there. The cold water was pumped through this thing and milk went over the outside. And because of the cold water was coming from out of the bottom of the tank, and the warm water went back on top of it, you was always had cold water going through this thing. And it – – – yes, it cooled it down very, very well. But later on, that wasn’t – – – wouldn’t be accepted anyway, I mean, you had to – – – when the bulk tanks came in, I mean they were refrigerated.”

The questionable pleasure of lukewarm milk

Several decades later, in the 1970s, Sue Gibbs was at school in Woomera in the north of South Australia.  Each day, the students drank milk before the recess break, regardless of temperature.  It wasn’t always the refreshing drink they would have liked!

Every student – at least in primary school – every student had to drink a carton of this Tetra Pak milk.  And it was a strange sort of three-sided little carton of milk.  And while it was a brilliant idea and nobody really minded it – you had to get a note if you were to be excepted from this – but otherwise everyone had to drink one.  And they were delivered just before recess and you had to drink one and then you were allowed to go out to recess, so of course that made you drink fast because you wanted to get outside, out of the classroom.  In some of the classrooms that I was in, I could see – – – we could see into the quadrangle and we would see when the delivery came.  And sometimes the delivery would come a bit early and the milk monitor would go out there right away and you’d get nice icy-cold milk.  But on occasions the milk sat in the quadrangle for a while and you might end up – – – your milk monitor might go out and pick out the top crate, or maybe all the crates had been exposed to the sun.  They’re all sitting there in the sun. And so you would get warm, disgusting milk.”

Drinking all the milk…

And it took a long time to get one of those cartons of milk down.  And when you’d finished your milk carton, you had to squash it to put it in some sort of receptacle, bin – but I don’t think it was a bin – it was a particular receptacle for the milk cartons.  And you had to squash the cartons, so therefore you could not get out of drinking this milk.  Great when it was a little bit icy, or even cold was nice, but when it had been sitting in the sun, drinking this lukewarm milk was not a pleasant task.”

Do you remember school milk? Did you have to drink it warm in summer?

Quotes from oral history interviews with Melville Keith (Pat) Connor and Sue Gibbs, courtesy of the State Library of South Australia (OH 695/1 and 1123/5 ).