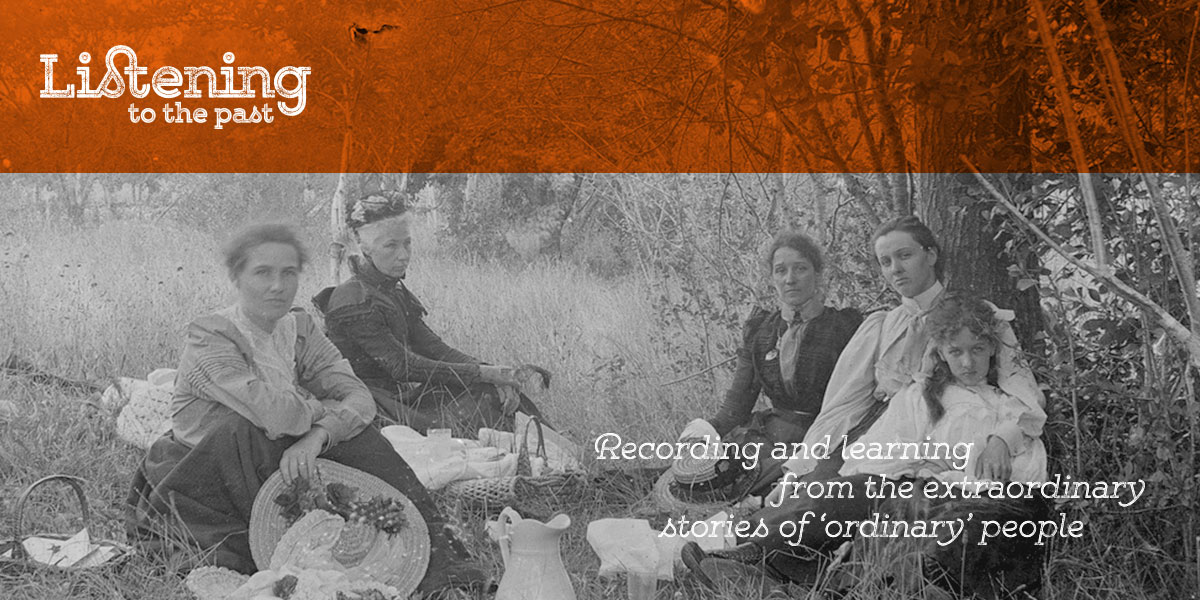 One of the many uses of oral history is to help us study the way we use spoken language, and how this can differ from written English.

Transcribing interviews to a written form is an important part of the process of undertaking oral history interviews.  It helps to make the interview more accessible, since it is much easier and quicker to search a written document than to scan an audio file for information of interest.  Transcripts also help us to study the language used by the speaker.

When you read through a transcript, it quickly becomes obvious that we speak very differently from the way we write.  In particular, we often forget grammatical rules when we speak, yet we use them without hesitation when writing.  This is true regardless of how well educated the speaker may be.

Andreea S. Calude, a linguist at the University of Waikato in New Zealand, recently wrote a fascinating article in The Conversation about these differences between written and spoken English.  Whereas we would usually write “there are five cars,” in speech we may use “there’s five cars.”  It’s not that we forget grammatical rules whilst speaking, and cannot tell singular from plural.  Rather, as Calude says:

In conversation, there is no time for planning. Expressions come out more or less off the cuff (depending on the individual), with no ability to edit, and with immediate need for processing. We hear a chunk of language and at the same time as parsing it, we are already putting together a response to it – in real time.”

We regularly come across these differences in the use of singular instead of plural in oral history transcripts, as the following examples show:

There was only two people in the group.”

There was around 15 people working.”

There was three ladies in there.”

There was the two ways of looking at it.”

We often do not finish sentences when we speak.  This is very obvious when you see the spoken word in written form, in a transcript, but we don’t usually notice it when we are in the middle of a conversation.  It would make for interesting written English if – – – !

Here are some examples from interviews:

You can see from this photograph that – – –.  They were wire beds, if I remember correctly.”

That was a problem many, many years ago because there was no such – – –.  I had my own toolbox with all my spanners in.”

And there’s this beast of an aircraft and – – –.  They had a simulator, which was very, very poor.”

It is quite normal when speaking to jump from one thought to another without finishing the first one out loud.

Because spoken English is so different, it can sometimes be a surprise to read the transcript of an interview.  For the person who was interviewed, it can be disappointing to see that one’s spoken English is grammatically less accurate than expected.  Oral historians therefore try to reassure interviewees that spoken and written English are not the same.

Some institutions provide advice about the nature of the English in oral history transcripts.  For example, the State Library of South Australia usually has a cover sheet with “Note to the Transcript.”  These notes include the following:

Readers of this oral history transcript should bear in mind that it is a record of the spoken word and reflects the informal, conversational style that is inherent in such historical sources… This transcript has been produced so that it is, so far as possible, a verbatim transcript that preserves the interviewee’s manner of speaking and the conversational style of the interview.  Certain conventions of transcription have been applied (i.e. the omission of meaningless noises, false starts and a percentage of the interviewee’s crutch words)… Sentences that were left unfinished in the normal manner of conversation are shown ending in three dashes‑ ‑ ‑. “

Are we worse at grammar now?

Interestingly, the use of singular instead of plural in English may not be not new.  Calude refers to a study showing use of singular instead of plural verbs in New Zealand in the 19th century, although this seems to have been in written rather than spoken English.  Studying oral history transcripts over the decades would be an excellent way of discovering whether we are indeed worse at grammar in spoken English now than we were decades ago.

Examples of oral history history transcripts are from interviews for which permission to publish has been obtained.  For this particular post, I have chosen to keep the identity of the speakers anonymous.